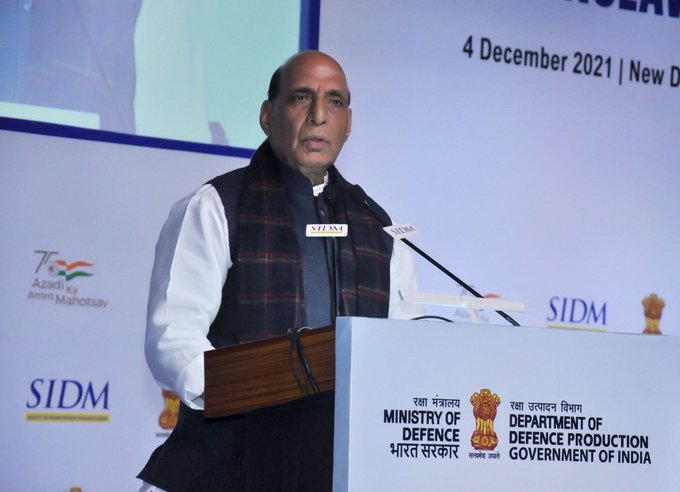 India will soon become a supplier of advanced technologies: Minister of Defense

New Delhi: Defense Minister Rajnath Singh called on micro, small and medium enterprises (MSMEs) to invest more in research and development and to manufacture new products and technologies and thus contribute to the security and progress of the country.

He was delivering the keynote address at the MSME Conclave, hosted by the Department of Defense Production, Ministry of Defense in partnership with the Society of Indian Defense Manufacturers (SIDM) in hybrid mode, in New Delhi on December 4, 2021.

Rajnath Singh urged MSMEs and SIDMs to create an industrial base in India, modeled on the German â€œMittelstandâ€ (Mittel-Stunt), recognized worldwide for the manufacture of metal equipment.

Singh said the government is prioritizing self-sufficiency in defense given the ever-changing security scenario, adding that it is necessary to move forward to unleash the full potential of MSMEs in the country. sector.

He expressed confidence that Indian manufacturers and their associated MSMEs will play a major role in meeting the country’s defense needs and also meet global needs.

On the important role played by MSMEs in realizing Prime Minister Shri Narendra Modi’s vision of â€œAatmanirbhar Bharatâ€, said Raksha Mantri, large industries play an important role in national security and economic development by manufacturing tanks, submarines, planes and helicopters, however, behind these large platforms lie small industries. In this era of outsourcing, huge platforms are assembled by thousands of components provided by these hidden MSMEs, he said.

Singh added that MSMEs not only support large entities by manufacturing quality products at the subsystem and component levels, but also generate direct and indirect jobs for the people. Affirming that large industries and MSMEs complement each other and together can strengthen the security and economy of the country, he gave the full support of the government to achieve this goal.

He described MSMEs as the backbone of industry which is also responsible not only for economic activities but also for social development.

â€œToday there are a significant number of MSMEs in our country, which contribute 29% to our GDP through their national and international trade. After the agricultural sector, it is the main source of employment for around 100 million people. MSMEs also strive to involve innovators and mediators in large companies. They help achieve the goals of large industrial entities by becoming an important part of the value chain and supply chain, â€he added.

The Raksha Mantri pointed out that compared to large entities, the concentration of wealth by MSMEs is less and its distribution is dispersed, which helps to reduce economic inequalities. MSMEs can certainly play a big role in empowering the country’s youth financially and making their dreams come true, he said.

â€œWe have bank and capital market policies in place so that our MSMEs can get the maximum amount of capital easily and cheaply. We have launched a policy of integrating the value chain and creating common facilities, industrial parks and two defense industrial corridors to reduce the fixed costs of MSMEs â€, said Shri Rajnath Singh while expressing the government commitment to fully harness the potential of MSMEs.

He listed some of the initiatives that aim to promote the indigenous design, development and manufacture of defense and aerospace equipment in the country under â€œMake in Indiaâ€ by harnessing the capabilities of the public and private sectors, especially the MSME.

â€œWe have an aerospace and defense industry estimated at Rs 85,000 crore. The private sector contribution in this area has increased to Rs 18,000 crore. Our vision to make India a global defense manufacturing hub, â€he said.

Measures taken to encourage MSMEs include issuing a Request for Proposal (RFP) to MSMEs without any financial conditions in procurement cases where the estimated cost does not exceed Rs 100 crore / year or the total value is less than Rs 150 crore, as applicable. upper; assignment of projects in Make categories, the supply of which does not exceed Rs 100 crore / year based on the delivery schedule at the time of the Necessity Acceptance Request (AoN) and revised compensation policy 2020 where the Indian clearing partner is an MSME.

Shri Rajnath Singh added that projects under the Innovation for Defense Excellence (iDEX) and Technology Development Fund (TDF) program are mainly reserved for startups and MSMEs. â€œThese programs extend financial support to defense technology development and user service support, thereby providing the necessary impetus for MSMEs, startups and individual innovators. They are funded by financial grants to provide innovative solutions to service challenges, and new technologies such as artificial intelligence, data analytics and robotics can be used, â€he said.

Raksha Mantri also mentioned the Defense Ministry’s approval of a central sector program for iDEX with budget support of around Rs 500 crore for the next five years from 2021-2022 to 2025-2026. The program will provide financial support to around 300 start-ups / MSMEs / individual innovators and around 20 partner incubators through the Defense Innovation Organization (DIO).

He further stated that the ministry had earmarked Rs 1,000 crore for purchases of iDEX start-ups during the period 2021-2022 to promote the development of new defense technologies and support the growing base of start-ups. in the country. He appreciated that at present more than 30 projects are underway under TDF and more than Rs 150 crore has been spent.

Shri Rajnath Singh spoke about the Defense Research and Development Organization (DRDO) ‘Dare to Dream’ innovation competition which is a tribute to the former President of India and eminent scientist, Dr APJ Abdul Kalam. The competition recruits startups under the TDF program and provides them with financial backing and financial support to develop advanced technologies and military products. He said he was convinced that Indian industry would soon become a supplier of advanced technologies not only to the Indian armed forces, but also to the global market.

â€œThe government aims to achieve the export target of Rs 35,000 crore by 2024-25. At present, India exports defense equipment to around 70 countries. According to the 2020 report from the Stockholm International Peace Research Institute, India is on the list of the top 25 countries in terms of defense exports, â€he said.

Shedding light on other steps such as the Srijan portal, the notification of positive indigenization lists of 209 items and the â€œstrategic partnership modelâ€, Raksha Mantri reiterated the government’s resolution of â€œMake in India and Make for the World â€. He said that all of these measures have resulted in an increase in the number of contracts awarded to the indigenous defense industry.

â€œFrom prioritizing the sourcing of Indian / IDMM (designed, developed and manufactured in an indigenous way) categories to supporting R&D, we strive to harness technology through active collaboration with industry, academia and technology suppliers, equipment manufacturers, quality controllers and users, â€he said. commending the armed forces for their continued support to the government’s efforts to achieve the goal of “Aatmanirbhar Bharat” envisioned by Prime Minister Shri Narendra Modi.

Shri Rajnath Singh added that due to reforms undertaken by the government, the country’s defense exports have passed the 38,000 crore rupee mark in the past seven years; 12,000 MSMEs have joined the defense sector and there has been an increase in R&D, startups, innovation and employment opportunities. SIDM now has more than 500 members thanks to these policies, he said.

Raksha Mantri commended SIDM for actively working with government to promote private sector participation in defense manufacturing, saying it plays an important role in informing industries of government initiatives, informing the ministry of their perspectives and providing valuable suggestions. in the current new policies. He said that the growth and ever increasing reach of SIDM reflects the growth of the Indian defense industry. He hoped this Conclave would provide them with new opportunities for growth.

In his opening remarks, SIDM President Shri Jayant Patil affirmed SIDM’s commitment to supporting MSMEs and facilitating their growth. He looked forward to continuing to work proactively with the MoD to identify new opportunities for MSMEs and further integrate into the sector.

The main objectives of the MSME Conclave are to unleash the potential of non-defense sector MSMEs located in Tier II and Tier III cities across India by providing them with relevant information on the â€œMake in Indiaâ€ program in the field of defense; give new impetus to the development of defense production in the country both for its internal needs and for export to friendly countries; provide know-how to Indian MSMEs active in sectors other than defense for their entry into the defense sector; Familiarize them with the various funding mechanisms established specifically to facilitate capable entrepreneurs with low capital or for capital intensive projects and educate them on the potential market and business opportunities in the Indian defense sector.

Currently in India, several thousand MSMEs work in different sectors and are usually connected as multi-level partners with various government institutions and large private sector OEMs. One of the main objectives of the â€œMake in Indiaâ€ initiative is to integrate MSMEs into the defense supply chain, thereby enhancing defense self-reliance and contributing to the defense export market.

Senior officials from the Ministry of Defense and SIDM and industry representatives were present during the conclave.

Sonata Software recognized for its advanced capabilities in Microsoft Dynamics 365