According to Ji, the 30MW coal-fired power plant for the first time uses a high-temperature and ultra-high pressure primary reheat thermal system (uHPHT) at home and abroad, which will significantly improve the overall thermal efficiency of the power plant, will reduce coal consumption and the overall cost of production. Compared to the conventional high temperature and high pressure system, the uHPHT system is expected to reduce standard coal consumption by approximately 10,400 tonnes, and the estimated carbon dioxide emissions will decrease by 23,700 tonnes. In addition, the total cement production will be increased by 18,100 tonnes after the completion of the project. 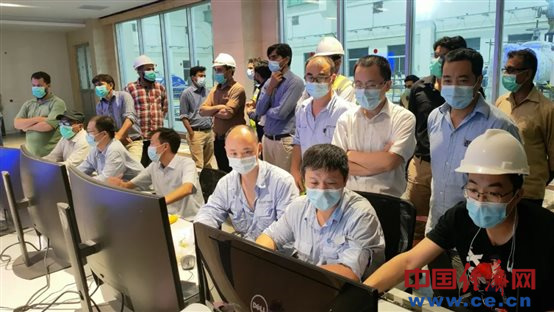 At present, more than half of cement factories in Pakistan’s cement industry have adopted Sinoma Energy Conservation’s waste heat power generation system. In addition, we have also carried out many detailed planning in the fields of photovoltaics, biomass energy, wind energy, hydropower and small and medium self-powered power plants. In the field of renewable energies, we undoubtedly have a very wide scope of cooperation with large industrial and commercial enterprises in Pakistan, Ji noted.

On the other hand, Sinoma Energy Conservation currently has four project departments in Pakistan, with a total of about 20 local employees. During the outbreak, we adopted a combination of on-site training and online counseling to train employees in energy conservation. Under normal circumstances, we usually organize them to train in China for one to three months. The reporter learned that energy conservation programs in Pakistan have significantly boosted the increase in the employment rate around the project location. In the future, Sino-Pakistani cooperation in low-energy construction will not only contribute to the global goal of carbon neutrality, but also contribute to local employment.

So far, DG Khan cement plant had worked four times with Sinoma Energy Conservation Ltd. And SEC has built more than 20 projects in Pakistan. On September 21, Chinese President Xi Jinping said China will step up its support to other developing countries in developing green and low-carbon energy, and will not build new coal-fired power projects in the region. ‘foreigner. Xi made the announcement in his video statement during the general debate at the 76th session of the United Nations General Assembly. In view of this, how to maximize the use of existing fossil-fueled power plants without building new coal-fired plants, while integrating closely with environmental protection and low-carbon emissions, is the key question that related companies in China, Pakistan and the world should think deeply.